Funeral services for Steven Pihelgas, 14, who as killed Sunday, December 9 in a tractor accident in Lyle, were held Wednesday, December 12 at our Savior's Lutheran church in Lyle with the Rev. Harold Luecke officiating.

He was baptized at Our Savior's Lutheran church, attended Lyle grade school, and was a freshman at Lyle high school at the time of his death. He was a member of the confirmation class to be confirmed in 1974.

Steven was a First Class Scout of Troop No. 120, was interested in music, science and the outdoors, and assisted his father in his business.

He is survived by his parents, one sister, Julie; his maternal grandmother, Mrs. Henry matter of Austin, nine uncles, five aunts and numerous cousins.

Interment was in Grandview Memorial Gardens in Austin with Rev. Luecke in charge of the committal services. 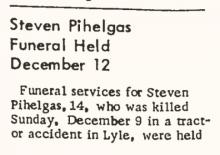