Two old whiskey bottles have been located that are embossed with Lyle names. The H. N. Peterson bottle I bought from a guy who found it in a riverbank near Rudd, Iowa. It says "H. N. Peterson & Co. // 8 Years Old // Old Crow // LYLE MINN". The other is a shard of a bottle that was dug by Brian Mann and Mark Youngblood near Princeton, Minnesota. It says "REDDING & RUNNING'S // FINE WHISKEYS // LYLE, MINN. // FULL 1 PINT". 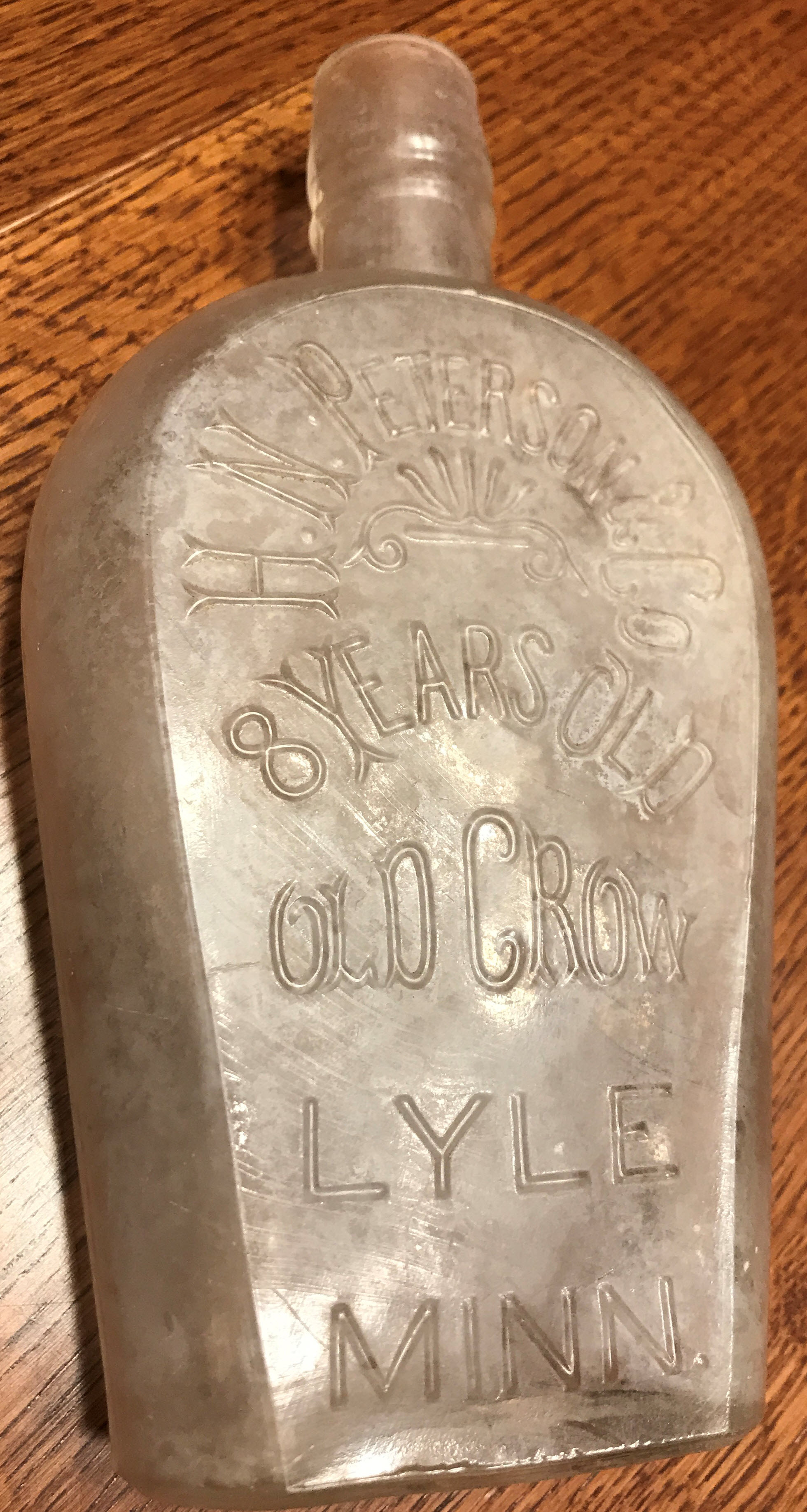 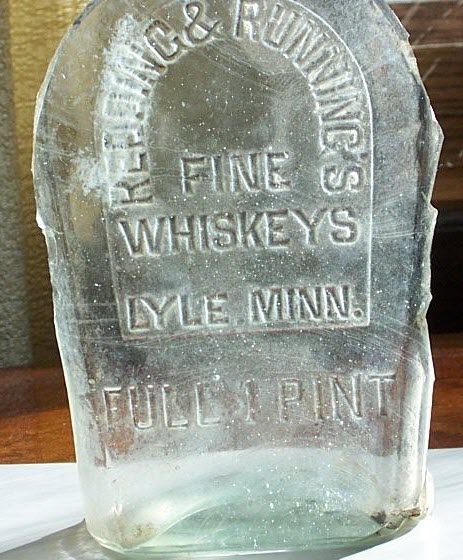 We are planning on doing an outhouse dig on 15-16 Sept 2018 in Lyle to look for more bottles. I have lined up 15 houses that are potential candidates, and Mark Youngblood and Brian Mann are the bottle collectors that do the rest. We are looking for more examples of these bottles, perhaps other sizes, and maybe other embossed bottles from Lyle or surrounding towns. I suspect there may be bottles by A. B. Olson who was a liquor wholesaler in Lyle, or from Stanley who owned a drugstore. 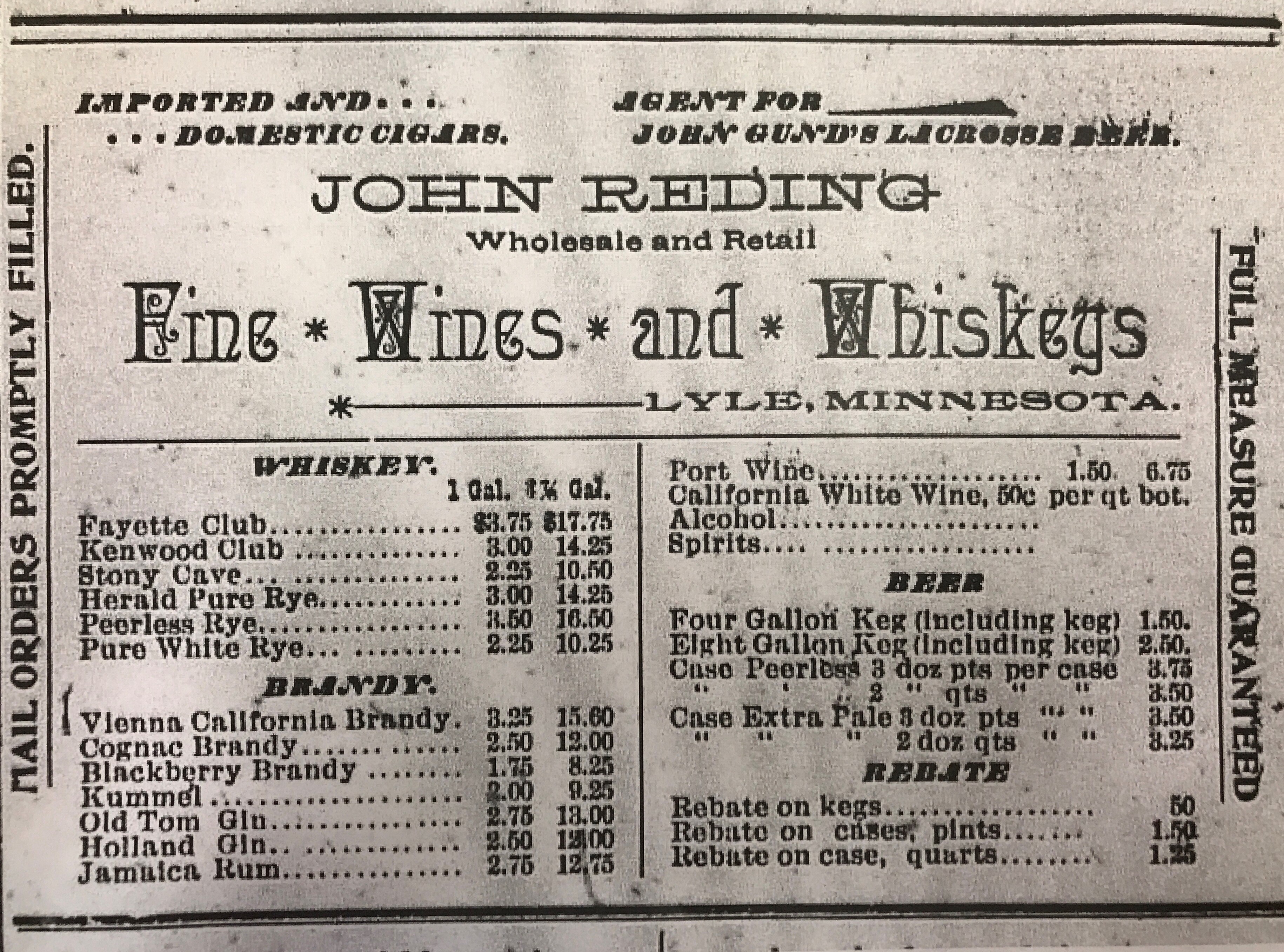 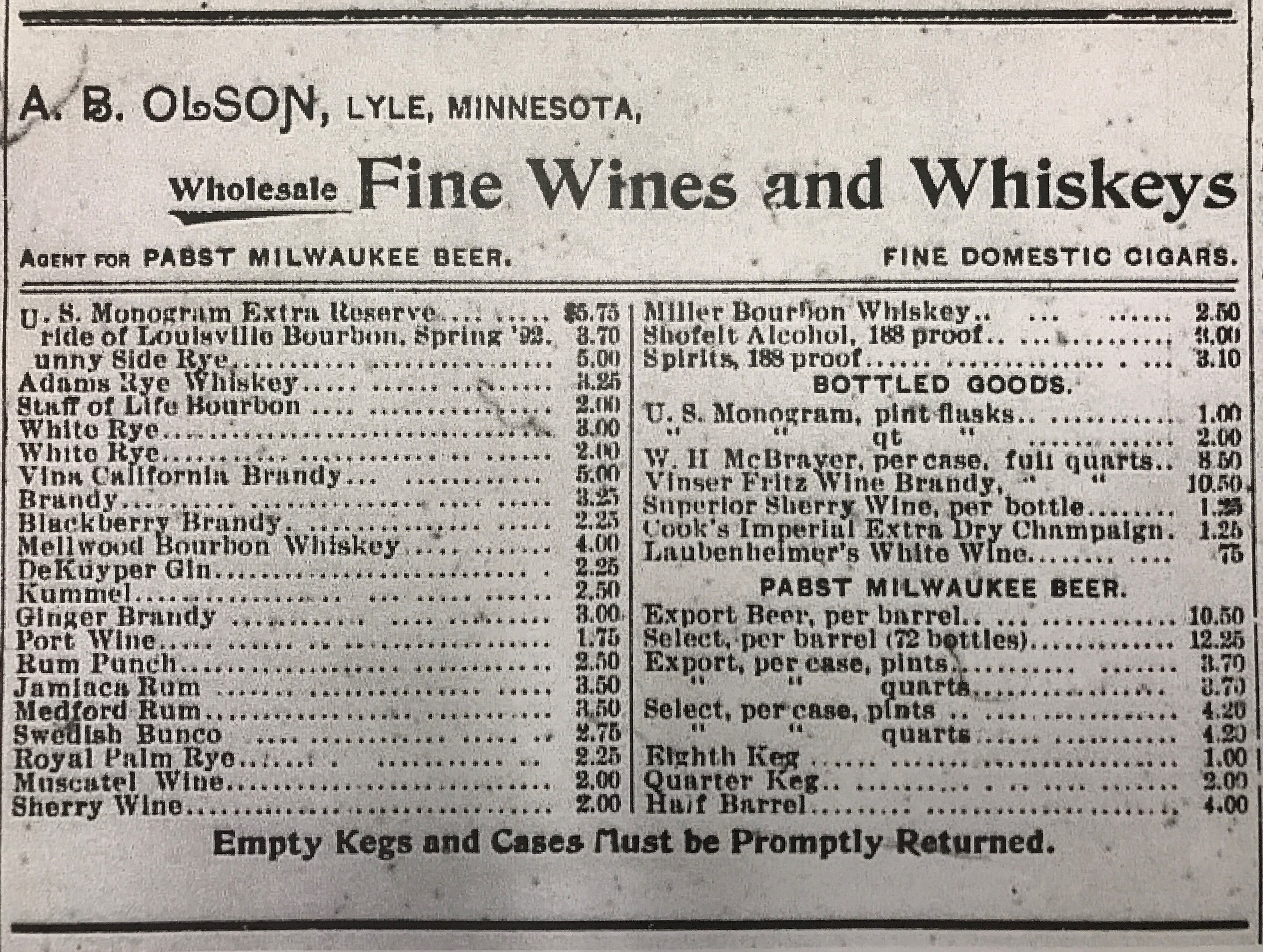 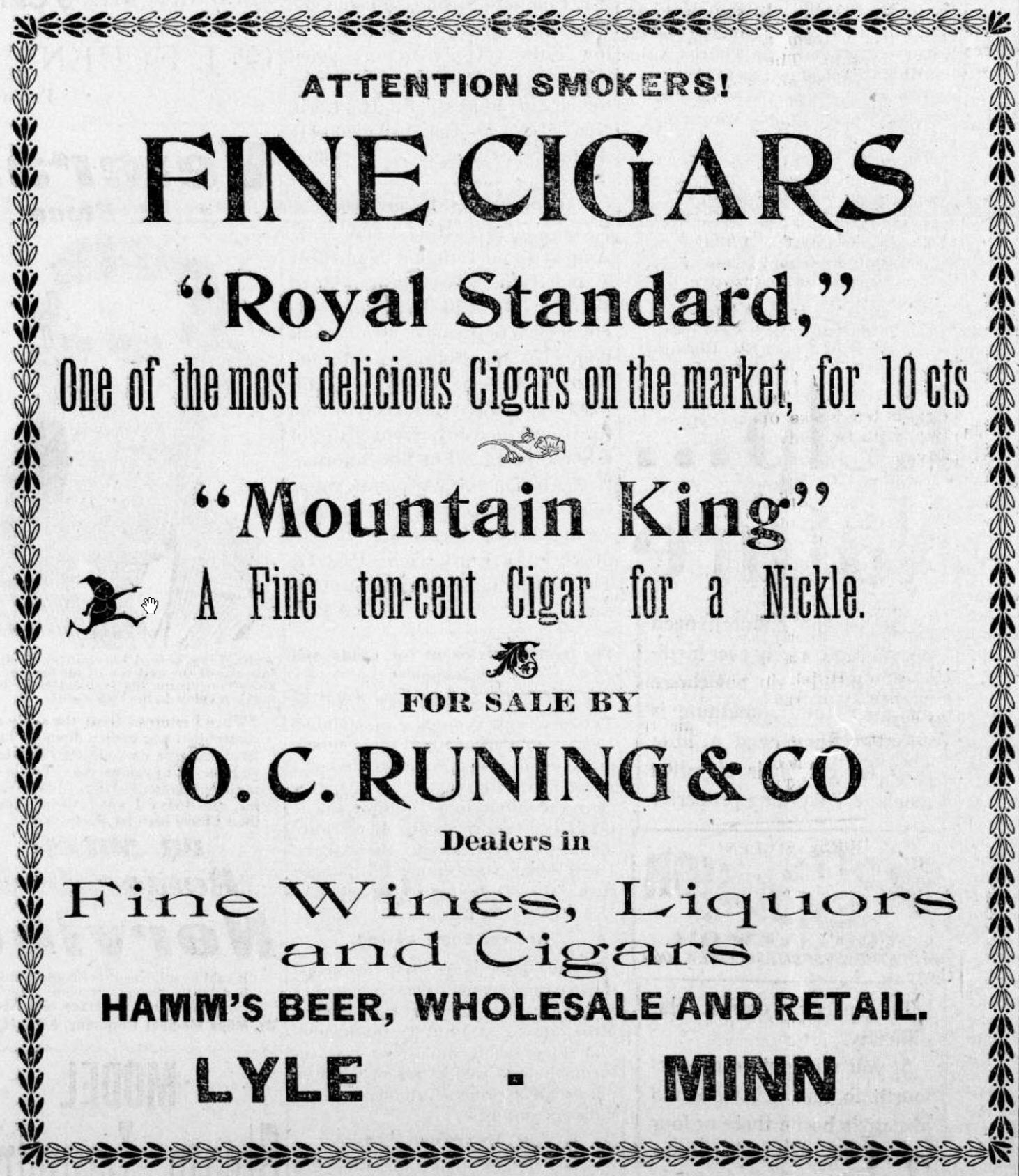 Here are a few videos of the bottle collectors I'm working with, Mark Youngblood and Brian Mann. You can find more videos on youtube by searching for "Mark Youngblood bottles".

COLFAX — Ever since he first learned about Ole Noer drugstore bottles a couple of years ago, Troy Knutson has wanted one.

The bottles, as it turns out, are not that easy to find.

Knutson is the author of the book, “Looking Through the Lens,” a pictorial history of Colfax published in 2014 for the Colfax Sesquicentennial.

He also is an avid collector of Colfax artifacts and memorabilia.

At the time Ole Noer was the druggist in town, businesses could order glass bottles manufactured with the name of the business in raised letters.

If there was an Ole Noer bottle to be had, Knutson wanted to find it.

Except — the bottles simply did not exist in any of the normal channels Knutson uses for finding Colfax artifacts.

So how did Knutson know there even was such a thing as an Ole Noer bottle?

“I didn’t know they existed, but Annie from Little Italy bought one at an auction. She gave it to Penny (Noer) to give to Penny’s daughter. And Penny had it sitting on the shelf (at her apartment at Colfax Health and Rehabilitation Center). That was the first time I saw one,” Knutson said.

Penny Noer is the wife of the late Juul Noer.

“I suppose it was within the last couple of years. I didn’t know they existed before that. Then I came across Mark Youngblood on Facebook, and then he had that presentation Michelle and I went to. I asked him if he had ever seen an Ole Noer bottle, and he said, ‘Oh yes, I’ve got one,’” Knutson said.

“‘Okay! Game on!’ I thought. I asked if I was able to hook him up with some sites to dig, would he come to Colfax?” Knutson said.

Mark Youngblood and his business partner, Brian Mann, are what is known as “outhouse archaeologists.” They excavate privy sites, because, well, you just never know what someone threw away in the outhouse a hundred years ago.

The outhouse archaeologists have developed their technique to the point where, when they have put the squares of sod back after a dig, it is almost impossible to see they have been there.

During Youngblood and Mann’s first dig in Colfax in April, their first archaeological site was on First Avenue.

Youngblood and Mann found a variety of bottles, such as “My Wife’s Salad Dressing” as well as a number of opium vials.

And a tiny little bottle that had once held perfume.

And a five-pound butter crock that was intact.

And a white pitcher that had a crack but was otherwise in good shape.

And a Bakelite syringe.

And then there were the whiskey bottles.

Quite a few whiskey bottles.

Most of them plain whiskey bottles.

But also one that was embossed with the name of the whiskey seller. From Menomonie.

Mark Youngblood and Brian Mann could not believe their good fortune.

Although they’ve been looking for one of those particular whiskey bottles for years, and have dug up many sites in Menomonie and found smaller examples, this was their first one-pint size whiskey bottle with the name Ole O. Berg and Main St. Menomonie, Wis.

And not just one of the Ole O. Berg bottles — but two.

Unfortunately, during their first dig in Colfax, an Ole Noer drugstore bottle was nowhere to be found.

Over the next several months, Youngblood and Mann returned to Colfax to excavate more outhouse sites.

And while they found a variety of other items, they still had not located an Ole Noer drugstore bottle.

Not until they came back to Colfax on August 27 and started digging an archaeological site at a house on University Street now owned by Solomon Plank, a firefighter with the Colfax fire department and a local contractor.

“We found two of them. This one is a little more swirly. They gave me my choice. I liked the swirly,” Knutson said, holding up his Ole Noer bottle so it could be photographed.

The bottle had a faint iridescent sheen to it.

“It’s been down there for over a hundred years now,” he said.

The glass bottle held 100 cc of some kind of medication, cough syrup perhaps. The bottle looks as though it may have been closed with a glass stopper, although if it was, the glass stopper is long gone.

“It was in the first pit we dug. They had probed the yard when they were here before. ‘This is a good spot (Youngblood had said). We’ll start here the next time we’re in town,’” Knutson explained.

“They started probing (August 27), and we started digging. That pit was six or six-and-a-half feet. There was quite a bit of stuff in there. There was a whole pile of drug store bottles. But they were all plain,” he said.

“Mark has a thing that he calls ‘bottle roulette’ or something like that. He’ll say, ‘oh, look here. What do you think it is? Do you think it’s the one?’ And I had learned to say, ‘No I don’t think it’s the one because it never has been.’ And this time he goes, ‘I don’t know…’ and he got a big smile on his face. I said, ‘Are you kidding me?’ And he held it up, and there it was,” Knutson said.

“Two of the pieces together made the slug plate (that says Ole Noer on the bottle). So I glued it together and gave it to Mona. It’s not quite a full bottle but it’s a start,” Knutson said.

“We first started digging in town in April. I think they’ve been here at least four times,” he said.

“Mark has an Ole Noer bottle, but Brian didn’t have one. And they said all along that the first one we found, I could have — since I provided them with all of these leads and the properties. It wasn’t 20 minutes later that he came up with another one, so Brian had his, too. I haven’t asked yet if we find anymore if I get a chance at those,” Knutson said.

The Ole Noer bottles really do not seem to be very common, because not only do they tend not to come up on auctions, but they also do not show up in outhouse sites.

“We are still looking for properties to dig. They are pretty busy right now, but (Mark Youngblood) is hoping to be back at the end of October,” Knutson said.

“We dug two pits at (Solomon Plank’s house on University). This first one, and then another one that had a lot newer stuff,” he noted.

The archeological crew also went to another house that day with what seemed like a good spot, but there was nothing in the pit.

“It ended up there wasn’t a single thing in it, except for a Mason jar maybe seven feet down. Why did they dig a hole that deep for one Mason jar? There wasn’t even the signs of an outhouse there. They were kind of puzzled by that one,” Knutson said.

As well they might be. Objects in the ground, over time, seem to work their way toward the surface rather than working their way downward.

“In this first pit, there was a bottle from Eau Claire that they kept. And then there was a bottle that was flat on the edge. It was a name and ‘dealer in Minneapolis, Minnesota’ or something like that. On the other side it had some Norwegian name and a Norwegian town in Norway. I am assuming the main office was in Norway and the place in Minneapolis was a distributor. It was a cool bottle. And fairly large too,” Knutson said.

“And we found part of a broken eight-inch calendar plate for some store in Cadott. We also found another part of a porcelain doll head. And I found a glass button. Whoever lived in that house (on University) must have been sick a lot. There were probably 40 or 50 medicine bottles. There were a few Walters and Leinenkugel bottles, too, but there were a lot of medicine bottles,” he said.

“As we were digging, we kept finding the little plastic tags from vegetable plants that you stick in the ground. Mark said, ‘there must have been a garden here at one time.’ I got to thinking. Aunt Joyce and Bruce Sundstrom used to live in that house. And I bet that’s where Aunt Joyce had her garden. I played in that yard as a kid,” Knutson said.

“So I was walking all over Ole Noer all those years as a kid, but I had no idea I would be interested in looking for him. And there he was, right underneath my feet,” he said.

“When we found this one, I was ready to dig up Solomon’s whole backyard. I thought if there’s two, there’s got to be more. I didn’t want to go anywhere else,” Knutson added.

“Now people are telling me that since I have found an Ole Noer bottle, I can put my mind at ease,” Knutson said.

“But I say, ‘No, oh no. This is just another seed. Because the Ole Noer bottles came in different sizes,’” he said with a glint in his eye.

The outhouse archaeologists date the Ole Noer bottle 1900 to 1905.

The existing drug store building was built in 1899, but Ole Noer started out down the street in a building where the Karl’s Chevrolet lot is now, Knutson said.

So who knows what else the outhouse archaeologists will find in Colfax on their next dig?

Only time will tell…