LYLE -- The funeral for Joseph Albert Follmuth will be at 2 p.m. Sunday at Our Savior's Lutheran Church in Lyle, with the Rev. Barbara Finley-Shea officiating. Burial will be in Pleasant Hill Cemetery in Mona, Iowa, with military rites by Lyle American Legion Post 105.

Born July 24, 1932, in Mitchell County, Iowa, he grew up in the area and graduated from Lyle High School in 1950. From 1953 to 1955, he served in the Army. He was stationed at Fort Sill, Okla., and achieved the rank of sergeant. On June 5, 1955, he married Marlys Johnson at the Lutheran Church in Mona and they farmed in the St. Ansgar area throughout their married lives. Mr. Follmuth was a member of Our Savior's Lutheran Church in Lyle, American Legion Post 105 and served on the Pleasant Hill Cemetery Board. He enjoyed playing pool.

Friends may call from 5 p.m. to 8 p.m. today at Worlein Funeral Home in Austin and an hour before the service Sunday at the church. There will be a prayer service at 7 p.m. today at the funeral home. 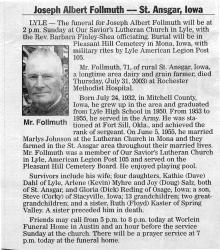