Bold Robbery.
On Saturday before Christmas, John Chandler and his brother suffered a savy loss by theft and incendiarism, near Austin. By some means it leaked out that a boy by name of Welch was concerned in the matter, and was prevailed upon to turn States evidence in the case.

The principal criminal, whose name we did not learn, was immediately arrested, and the hearing had at Austin. On the examination, it appeared that S. Chandler owned a valuable farm in Cedar City near Austin, upon which premises were buildings, such as house, stables, shed, granary, [illegible:dc?]. In the shed were stored a fine Reaper and Mower and other valuable farm machinery belonging to him while in the granary was stored a large amount of wheat, belonging to both John and S. Chandler. The former was engaged in business at Moscow, while the latter was spending the winter at Austin.

On the night in question, the prisoner, a man living near by, prevailed upon the witness to accompany him and share the profits. Proceeding with two teams, to the place in question, they discovered that the house near by was occupied, and therefore [illegible:secret?] themselves and teams in the shed until about 11 o'clock, when the light at the house being extinguished, they broke into the granary and carried away seventy or eighty bushels of wheat, after putting out, as they supposed, the fire which they had kindled in the shed to keep them warm. Towards morning the inmates of the house were aroused by the alarm of fire and found shed, stable and hay all in flames. Everything in and about them were destroyed. We were told that two Attorneys at Austin appeared for his defense and prevailed upon the Justice to fix bail at $300. The thief, who was said to be quite wealthy, has since escaped into Iowa, a poorer, if not better man. 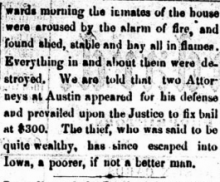