The remains of the late Mrs. Lewis Leverson of Leeds, N. D., whose death was reported in last weeks issue of the Tribune, were brought to Lyle last Thursday and interment was made in the Six Mile Grove cemetery.

Sophia Meyer was born in Nevada Township in Feb. of 1878 and died at her home at Leeds, N. D., Dec. 11. On Dec. 27, 1902 she was married to Lewis Leverson, who survives her. She also leaves one sister and four brothers besides her parents to mourn her loss. 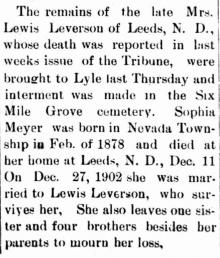