Richard was born May 22, 1920, in Austin, Minn., to John and Lulu (Gregg) Murphy. One of four brothers, Richard attended school in Gregg County School District No. 10. He worked at Austin Drug before starting to farm with his grandfather, Reuben Gregg, near Lyle. This has been a family farm for 152 years.

Richard served in the National Guard prior to World War II. On Oct. 4, 1941, he married Mildred Irene Helgeson in Lyle, Minn. The couple raised three children.

Richard and Mildred moved into Austin in 1989. Richard retired from farming at the age of 85.

A member of Our Savior’s Lutheran Church in Lyle, Minn., he served on the church council. Richard was also a member of the Lyle Lions Club, a former school board member, and ASC board member. He loved being with family, especially his grandchildren and great grandchildren. He especially enjoyed his daily drives with Mildred and having breakfast and coffee with Roger Walsh.

He was preceded in death by his parents John and Lulu Murphy and three brothers Chet, Marion, and Vernon.

Funeral services will be held at 1:30 p.m. on Tuesday, April 2, 2013, at Our Savior’s Lutheran Church in Lyle with the Rev. Barbara Finley-Shea officiating. Visitation will be held from 4 to 8 p.m. on Monday, April 1, 2013, at Worlein Funeral Home in Austin. Interment will be in Pleasant Hill Cemetery in Mona, Iowa.

The family prefers that memorials be directed to Alzheimer’s Research. Condolences may be expressed to the family online at www.worlein.com 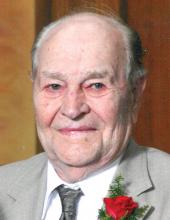 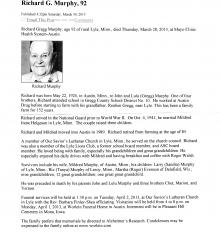