Week after week is chronicled the death of some of the early settlers of the community and from our midst are quickly passing those who bore the hardships struggles and privations of pioneer life. One who for nearly half a century lived in this vicinity has, this week, passed to her reward. Mrs. Dorthea Siverson, who died at her home, Thursday morning, after a week's illness, was born in Solar, Bergen, Norway, Oct. 10th, 1834. In the year 1870 she came to America and settled in this vicinity. For three years the family lived on the farm 1/2 mile north of town and later moved to their own farm, a little farther north, where they resided 25 years and then came to Lyle. Mrs. Siverson leaves a daughter, Mrs. Frank Pavalec, and an adopted son, Oscar Berg of Hettinger, N. D., the husband having passed away about ten years ago.

The funeral was held Saturday afternoon at one o'clock at the Lutheran church and interment made in Pleasant Hill Cemetery. --Lyle Tribune. 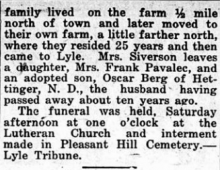