The funeral of the late Mrs. Karon Fischer was held at the Mission church Friday afternoon and Rev. Moe conducted the services. The deceased was on of the early settlers in this section, coming here in the seventies.

She was born in Sogndahl, Norway, January 10th, 1838. Her husband died in September 1893. She lived on the farm northwest of Lyle until about 15 years ago when she moved to Lyle. Here she lived until June last when she went to Austin to make her home with her niece Mrs. Jennie Chapin who with a brother, Ole Olson, are the only surviving relatives. The remains were laid to rest besides the husband, in the old cemetery near Mona. --Lyle Tribune 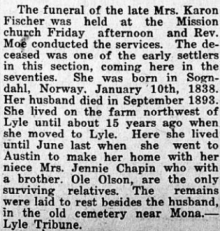