John Osborne passed away at the home of Miss Deming Saturday March 17, 1917, of heart failure. He had been about as usual and was out in the yard walking around and on entering the house sank into a chair unconscious. Dr. Leck was called but he had passed away before his arrival. He was born November 2, 1851, and was one of a family of ten children, all of whom are living except his brother George who died last September. He was generally known as Uncle John. The funeral services were held Tuesday at the Chapel, conducted by Rev. Mahoney. 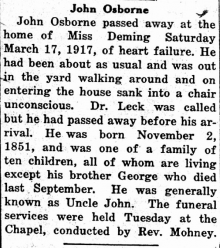