MINNEAPOLIS — Lyle/Pacelli has performed like a bunch of ax-wielding lumberjacks in this girls basketball state tournament.

The Athletics keep chip, chip, chipping away until finally — finally — their subject is felled.

It’s happened in both the quarterfinals and semifinals, the latter a 53-41 win over No. 4 seed Minneota on Friday afternoon at Target Center.

All of that chipping has landed the state’s No. 1-ranked Class A team in today’s championship at Target Center, where L/P will meet surprising Sleepy Eye at noon.

L/P is seeking its first girls basketball state title. The Athletics (31-1) are seeded first, while Sleepy Eye (28-4) is unseeded. The Indians pulled off a stunningly easy 63-48 win over No. 2 Mountain Iron-Buhl, one day after slipping past No. 3 seed Ada-Borup

If Lyle/Pacelli wins the championship, much of the credit will go to the Athletics’ persistence. They wore down first-round foe Heritage Christian Academy in the second half of the quarterfinals, then did the same thing to Minneota in the semis.

Both times, that came after being seriously tested during the opening 18 minutes.

But here’s the thing: L/P has talent at every position, as well as Class A’s most imposing center, 6-foot-5 senior Kristi Fett.

Opponents, it seems, can only take so much of what the Athletics have to offer. And though they only go about six deep, they never stop bringing it.

“Lyle/Pacelli does a wonderful job, and they have a really intimidating player in the middle (Fett),” said Minneota coach Chad Johnston, whose team dropped to 25-5. “We wanted to go right at her, but they did a good job of helping out on defense and covering things up.”

Minneota, much like Heritage Christian Academy one day earlier, went blow for blow with L/P to begin the game. With Fett being harassed defensively by Minneota’s collapsing man-to-man defense, the Athletics struggled to get in their usual offensive rhythm. Fett, who averages 27 points per game, managed just five in the first half and did it on a frustrated 2-for-7 shooting.

Fett credited the Vikings’ physical defense for that, while also admitting that she wasn’t on her game early. All of that had Minneota heading into halftime down just one, 22-21.

“(Minneota) played a good half of defense on me, but I also just wasn’t feeling it,” Fett said.

Still, she never panicked, and neither did her team.

“I knew I had my whole team around me, and I knew they were believing in me,” she said.

Sure enough, it was only a matter of time for Fett and the Athletics. After Minneota’s Morgan Hennen buried a 3-pointer with 11:36 left in regulation to narrow it to a one-point L/P lead, the Athletics went on a game-defining run.

It’s what they do. The chip, chip, chipping finally had taken a toll. There was a Fett inside basket, a Kendal Truckenmiller 3-pointer, two made free throws by Abby Bollingberg, another Fett hoop, and then finally a will-imposing inside make by Olivia Christianson to finish off a long, exhausting L/P possession. And on the other end, there was the Athletics giving Minneota almost nothing.

Fett had a bunch to do with it, as she finished with 17 points, 14 rebounds and seven blocked shots. But so did a bunch of others. Christianson had 13 points before fouling out with just over four minutes left, Bollingberg had 10 and Brooke Walter had seven. But even more importantly, the L/P defense held Minneota to 24 percent shooting.

“We just kept grinding away,” L/P coach Justin Morris said. “We won more possessions than they did.”

Lyle/Pacelli's Abby Bollingberg (21) goes up for a shot over Minneota's Morgan Kockelman (2) during the Class A state semifinals at Target Center on Friday.

Members of the Lyle/Pacelli girls basketball team celebrate after knocking off Minneota 53-41 during the Class A state semifinals Friday at Target Center. The Athletics play Sleepy Eye for the Class A state title at noon today. 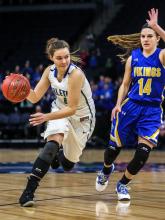 Lyle/Pacelli's Olivia Christianson (4) drives past Minneota's Abby Hennen (14) on Friday at Target Center. Christianson finished with 13 points in the Athletics' 53-41 victory. Top-ranked L/P will play for the Class A state title today.