Girls basketball: All for one, one for all

Girls basketball: All for one, one for all

The Lyle/Pacelli girls basketball coach hadn’t yet sat all the way down for a post-game press conference when, without prompting, he offered up: “We are so excited to have won this game.”

Morris isn’t big on hiding his emotions. There is no way he’s even going to make an attempt at that now, as his team is fighting to win the first girls state basketball title in program history.

Lyle/Pacelli took another step in that direction Friday at Target Center as it willed its way to a hard-fought 53-41 win over No. 4 seed Minneota in the state semifinals.

L/P is seeded No. 1 after carrying with it a No. 1 state ranking all season. This is Morris’ final crack at a state championship, as the sixth-year Athletics coach is hanging it up after this season, having moved to Omaha, Neb., but staying committed enough this season to commute for practices and games.

They are part of the reason that the tall and slender Morris has raised his arms and pumped his fists, then raised his index finger after both of these first two state playoff wins this week. He wants it for them.

But there is still an even bigger reason for all of the emotion.

“I just love this team,” Morris said. “I’ve never had a group that played for each other and loved each other this much. Their commitment to each other is like no team I’ve ever coached.”

A sampling of that showed up before the game, when the 6-foot-5 Fett continued her pre-game ritual of boosting the good feelings for sophomore standout Olivia Christianson. Fett does it with just a couple of words.

“I just tell her that I love her,” said Fett, L/P’s star who is headed to Minnesota State, Mankato to play basketball next year. “And I tell her how proud I am of her.”

“That just makes my confidence go up even higher when Kristi does that,” said Christianson, who averages 16 points and had 13 crucial ones Friday before fouling out with just over 4 minutes left.

Fett didn’t have her usual overwhelming game Friday. In fact, the girl who averages 27 points, 15 rebounds and 6 blocks relatively struggled in what was a difficult all-around first half for L/P. Fett had just five points on 2-for-7 shooting before intermission.

But when she went into the locker room at halftime, she knew things were going to be just fine. That’s because she’s got a bunch of teammates who have her back and she knows it.

It’s what makes this team special. It’s why Morris is cherishing this final state tournament run so much.

“Ï knew I had my whole team around me and I know they believe in me,” Fett said.

Buoyed by that, she spent the second half taking care of business. So did her team.

Now, she and the rest of the L/P players will try to come up with something special one more time. Saturday, the Athletics are playing for a state title. They’re ready to go win one as only they know how — together. 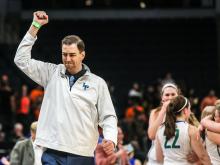 Lyle/Pacelli head coach Justin Morris reacts after his team’s 53-41 win over Minneota in the Class A girls basketball semifinals at Target Center in Minneapolis.

Girls basketball_ All for one, one for all _ Basketball _ postbulletin.com_.pdf