Brief Sketch of the Life of Mrs. Ingeborg Volstad.

A BRIEF SKETCH OF THE LIFE
OF MRS. INGEBORG VOLSTAD.

Mrs. Volstad was one of the pioneers of this section of the state of Minnesota, having resided here since the year 1856. She was born at Stabeck, Norway, March 12, 1833, her maiden name being Ingeborg Kittelson Stabeck. Her early years were spent in the vicinity of her birthplace, but at the age of 17 she left her native country and came to America, her destination being Rock Run, Illinois. At this place in 1856 she married Halvor K. Volstad and the same year moved with him to the Six Mile Grove settlement and established the family home where she spent the rest of her years as a devoted wife and helpmeet of her husband. She became the mother of six children, two of whom have gone before her to their eternal home.

Of her death it is sufficient to say that it was as her life- peaceful and quiet. After an illness of five days she fell asleep in the full trust and assurance of a child of God going to serve her Master in a new and greater life. She was a devoted and faithful Christian, one whose daily lot it was to serve others, but to her this was not a burden but a pleasure, and she deserves to be remembered as one who not only knew the teachings of Christ but used every means in her power to fulfill them.

The deceased is survived by Knut H., Chas. and Julia Volstad all of this place and Henry K. Volstad of Minneapolis. She was left a widow by the death of her husband at the family home two years ago. The funeral was held Tuesday afternoon at the Mission church and was conducted by Rev. H. E. Hoare of Minneapolis and Peter Knutson of Clear Lake, Iowa. Those who attended the funeral from away were Mr. and Mrs. Peter Knutson, Mrs. Olund of Clear Lake, and Fred Christenson of Eagle Grove, Iowa and Miss Matie Volstad and Mrs. Mary Angove of Minneapolis. 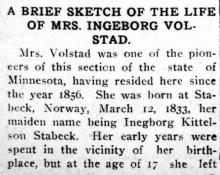