Tuesday at 3 o'clock occurred the funeral of Bennie Bothum of East Mona. he has suffered a good many years but was at last released. The family have our sympathy in their sorrow.

Bennie E. Bothum oldest son of Mr. and Mrs. B. Bothum died last Sunday morning August 19, at 8 o'clock, aged twenty-three years and nine months. He has been in poor health nearly all his life but last week he was taken very sick and Sunday morning he passed quietly away to a better land. A large attendance of friends and relatives followed him to his last resting place at the Sunny Side cemetery last Tuesday. 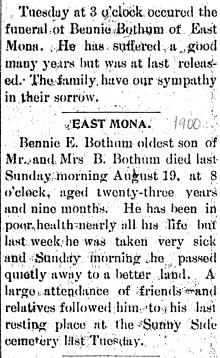