An Artist at 91: Her First Show Outside the Deli

About New York
An Artist at 91: Her First Show Outside the Deli
By Gregory Jaynes

It was all quiet out in Iowa yesterday, according to Atlanta Constance Sampson, who misses New York but isn't ambulatory enough to live here anymore. Ms. Sampson is a 91-year-old artist who just moved back home to Toeterville, thereby raising the town's population to 71. She left her paintings and watercolors behind, however, a lifetime's work, and next month she is to have her first one-woman show here - her first show anywhere, for that matter.

This seemed reason enough to ring her up. Too, there was a world of easy conversation openers at hand. Here it was New York primary day, and there she was in Iowa, where they've seen it all. And Louise Nevelson had just died, at 88, another artist who had to struggle an eternity before recognition caught up with her. But it turns out Ms. Sampson does not follow the news, and the only time she turns on her television is to hear a favorite Sunday morning preacher. She would be happy to talk about her work, though.

''When I was still living with my parents,'' she said, ''I'd get up real early every morning to paint the hollyhocks and morning glories by the west wall. When the sun came up, they closed up, you see, so I had to do this very early. Oh, it would have been about 1910 or 12, I guess. I'm trying to see if I can find some for the show.''

God might have blown it, however, if it had not been for Owen Ryan, a marketing consultant who happened by one of Ms. Sampson's works last December in the window of a delicatessen on Lexington Avenue, where she had made a couple of sales. Mr. Ryan stepped inside to ask whether the painting was for sale, and was introduced to the artist, who said, ''That painting's not for sale, sonny.'' She said she was taking the painting home to Toeterville, where she was resettling after living ages in New York. Mr. Ryan gave her a card on the chance she changed her mind.

A week later Ms. Sampson phoned, saying she'd found a similar painting in case he would care for a look. Mr. Ryan hastened to her tiny place on East 61st Street, a bed-sitter. ''It was an amazing and poignant scene. Here in the smallest New York City apartment I had ever been in - and that's saying a lot - this woman was literally surrounded by artwork of dazzling color and light.'' She said she was leaving the city without having realized her dream, a show. Mr. Ryan recalled, ''I came back to the office that day, I wouldn't say stunned, but I would say sad and very excited.''

Mr. Ryan, not trusting his unlettered eye, asked Bryan Cordell, the art director at his company, to go and see what he thought. Mr. Cordell is not humble in the face of art. ''I said they were O.K.,'' Mr. Cordell remembered. ''They were sellable.'' Moreover, it was Mr. Cordell's assessment that ''she started safe and gradually became more subjective in her own mind, which is to say more abstract.''

To make a modestly short story fit an even stingier space, Mr. Ryan and Ms. Sampson became fast friends. Ms. Sampson returned to Iowa to be near her two sisters, one 96, one 86. Mr. Ryan moved her works, more than 600 pieces, into his own small apartment in Chelsea. The show, ''True Colors. The paintings of Atlanta Constance Sampson, 1896-Present,'' opens May 24 at the National Arts Club on Gramercy Park.

Much remains to be done in the way of cataloguing, framing, invitations and so on. Mr. Ryan is hard at it while still trying to cobble up some corporate sponsorship. ''This kind of thing you can't go into the bottom of a company,'' he said. ''You'll sit there forever. But let's face it, a c.e.o. is not going to sit there with slides and hold them up to the light.'' Still he has hope.

Ms. Sampson fell and cracked a rib last week but plans to be healed by show time. On the phone, between sketching in her biography, she said she was in terrible pain. Then she went on to say she graduated from the University of Minnesota and worked 14 years teaching art in the Detroit public school systems. She is a little hazy on some of the dates but she ''practiced up on my typing so I could work in an office to pay my expenses'' and moved to New York for good ''oh, a long time ago.''

She never married, though there once was a boy back in Iowa who told her, ''You know I'm not the settlin' down type.'' She once told Mr. Ryan, ''He would have married me but you know a divorce would have broken my heart.'' But on second thought, she said, with just the right measure of sauciness on her tongue, ''I have my art and men want women to fix hamburgers and things.'' 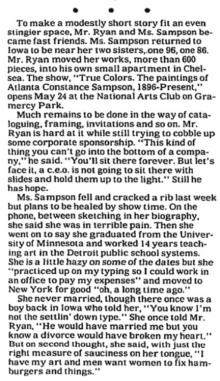