LYLE, Minn.- Numerous cemeteries dating back a century or more are run down and uncared for, but Woodbury Cemetery along Highway 105 west of Lyle on the Iowa-Minnesota border is 111 years old and is one of the best kept in North Iowa and Southern Minnesota.

Much of the credit for the maintenance of the cemetery must go to the Woodbury Willinger Workers, an organization which was formed in June 1909 and has continuously labored with love and small funds to keep the spot attractive.

The cemetery dates back to 1855 and, perhaps, even longer, but no earlier records are available.

It was started by J.D. Woodbury, one of the early settlers along the Red Cedar River in Lyle Township, Woodbury Creek and the cemetery are named after him. Among the first persons buried there were Civil War veterans.

Since all of the early records were destroyed in a fire, the monuments provide the early burial dates.

Marjory Bean is believed to have been the first person buried in the cemetery, but no marker has been found to establish the exact spot.

The second burial was that of Mrs. A. C. Chapin April 6, 1856. Also among the persons first buried there was Eloise Wilder, the first white child born in Otranto Township, Mitchell County.

Two of the charter members of the organization still belong. They are Mrs. Amos (Evelyn) Machacek, now 99, and Olive Bonnallie.

Many of the activities of the organization are made possible by a bequest it received in 1964. The bequest came from the estate of two brothers and a sister, George, Jerome and Anna Funda, who lived their entire lives near the cemetery.

Forty per cent of the estate, which amounted to more than $36,800 went to the Woodbury Willinger Workers. 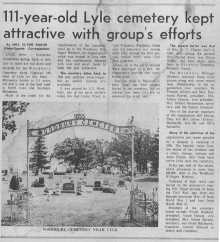