When his wife lived, Mr. Cook farmed near Cedar City but he left Austin several years ago and has been in Washington four years and in Des Lacs, N. Dak. for three years. He came here in June for treatment and had been at Rochester on three visits previous to having his operation. He was 57 years old.

He was born in New York City Oct. 4, 1856. His wife was Emma Griffin, daughter of L. J. Griffin. She died about Aug. 24, 1885. There were three sons, Floyd died when he was 2 years and 4 months old and another son died when an infant. One son Roy, lives in Washington. He runs a boat from Seattle to Alaska and did not receive word of his fathers death.

He leaves two brothers and two sisters, Mark Cook of Des Lacs, N. D., James Cook of Deering, N. D., Mrs. Chas. Klitzing of Elkton, Minn., and Mrs. Arthur Thomas of Wheelock N. D. All but the sister from Dakota were here to attend the funeral.

The body was brought to the home of J. G. Moreland in this city and services were held there Sunday at 1:30 and from the Presbyterian church at 2 o'clock Rev. Von Stilli officiating. He was laid to rest beside his wife and two sons in Cedar City cemetery. 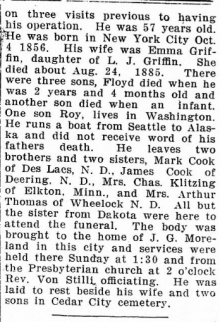