Wayne Fossey treated the whole world as if all were neighbors

Wayne Fossey treated the whole world as if all were neighbors

Funeral services for Wayne Robert Fossey who died December 17 [1991] at his home near Otranto, were held December 20 at the Mona Lutheran Church with Rev. Daniel Behnke officiating. Burial was in the Pleasant Hill Cemetery in Mona.

Wayne was born August 3, 1928 in Mitchell County to Alf O. and Amanda (Nelson) Fossey. After graduation from St. Ansgar High School he worked in St. Ansgar for a couple of years and then joined in the work on the family farm. He married Phyllis Mae Hansen in 1969 and they had four children. He farmed for 41 years. Wayne loved to travel and he went all over the continental United States and Hawaii and Alaska. One family member said, "For Wayne, there were no strangers. He treated the whole world as if all were neighbors."

He is survived by his wife, Phyllis; his son and daughter-in-law, Dan and Barb Klampe, Waseca, Minnesota; three daughters and a son-in-law, Tamera and Janis at home and Sue and Roger Dahle, Owatonna, Minnesota; five grandchildren; two brothers and sisters-in-law, Darwin and Betty Fossey, St. Ansgar, Merlin and Alice Fossey, Austin, Minnesota. He was preceded in death by his parents. 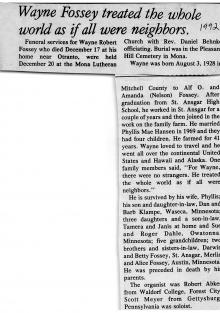