Sandra Kay Cramer was born Sept. 18, 1958, in St. Paul, Minnesota, the daughter of Edward and Carol (Cruikshank) Cramer. She graduated from Southland High School in 1977 before attending the Dakota County Vo-Tech for one year. Sandra worked various jobs over the years, including at IBM in Rochester and most recently at Donker’s Hometown Appliances until June 24, 2016. On Sept. 8, 1979, she was united in marriage to David E. Nelson at Trinity Lutheran Church near Austin. The couple raised four children. In her leisure time, Sandra enjoyed crocheting and tending to her flower garden. Her most precious time was that spent with her family. She belonged to Our Saviors Lutheran Church in Lyle.

A memorial service will be held at 1:30 p.m. on Friday, Oct. 7, 2016, at the Worlein Funeral Home Chapel in Austin with Rev. Barbara Finley-Shea officiating. Visitation will be held from 11:30 a.m. until the time of the service at the funeral home. Worlein Funeral Home of Austin is assisting the family with arrangements. Condolences may be expressed to the family online at www.worlein.com. 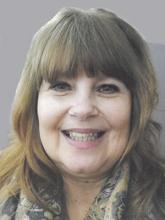