Russell O. Anderson, 90, died Wednesday at his home in Minneapolis.

A former resident of the Lyle and Mona, Iowa, area, he had been employed as a state bank examiner and also served as a state auditor for Minnesota counties.

Surviving are two brothers, Melvin of Washington and Andrew of California. His wife, Floy Dahl Anderson preceded him in death. 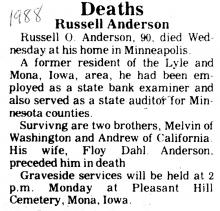