Robert Block Missing In Action On Korean Front Since July 16

Robert Block Missing In Action On Korean Front Since July 16

Mr. and Mrs. Jens Block of Lyle, Minnesota and former residents of St. Ansgar were notified last Sunday that their son, Pvt. Robert Block, 18 has been missing in action in the Korea fighting since July 16.

Bob, who has been in the army ten months, is a member of the 19th regiment of the 24th Division that has been in the thick of the fighting since the beginning of hostilities in June of this year.

Pvt. Block is a nephew of Mrs. Lee Hobbs of St. Ansgar. 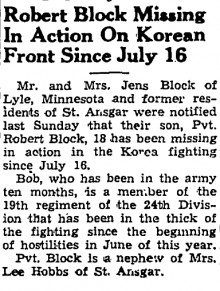