Rev. Alanson Beach, father of John Beach whose portrait heads this article, was born in the town of Rensselaer, Albany county, N. Y., on the 25th of October, 1808. His younger days were spent at school and on the farm. After finishing his studies, he taught winters and farmed the remainder of the year.

He was married March 15, 1832, to Sinai Tanner, a cousin of Sanford Tanner, who was born Feb. 24, 1809, in Albany county. After marriage they continued to live in Albany county two years and there John Beach was born May 16, 1833, Alanson Beach then bought a farm in Schoharie county and they lived there seven years. Their two children were born during this time; Wilson, now a resident of Austin, on May 17, 1836, and Zilah T., lately deceased, wife of J.H. Goslee, on March 22, 1838. Mr. Beach then sold out and returned to Albany county, where he lived about fourteen years. This was the season of school days and youth to his children, and makes it remembered more especially as their old home. Their education was principally at the common school, and John ceased attendance and taught the fall and winter after he was twenty. The next spring he entered the employ of a lumber firm in Albany, expecting the sale of lumber would be his permanent business. But some three and four months later, in consequence of the illness of his grandfather, Alanson Beach's father, he was called to take charge of his farm in Green county, N. Y. He remained in charge during his illness and after his death, till his personal property was disposed of. In the spring of 1855 his father, Alanson Beach, who had been selling out, preparatory to moving west, joined him in cultivating the farm.

In the fall of the year the father and son took a trip to Iowa to search out the goodness of the land and concluded they were well able to go up and possess it. The next spring, in 1856, Alanson came out directly to Mower county and purchased a quarter section of a Mr. Coe, lying in sections 32 and 33, 101-18, being in the township afterwards named Lyle. He then returned to New York for his family. John in the meantime had made such use of his time that on the 3rd of September, 1856, he was able to, and did, marry Miss Catherine M. Morrison and a few weeks later accompanied his father to Minnesota with a wife of his own. The two families came by rail to Fulton, Ill., while the younger son, Wilson went by canal from Albany to Buffalo with a span of horses and wagon, and was there put in charge also of a horse and buggy, acquired by his father for a debt after he started, and brought to Buffalo by John on the cars. John saw Wilson and teams safely shipped by boat for Chicago and by a little waiting joined the families en route. Wilson rejoined them at Fulton after a drive overland from Chicago. The whole party had a tedious drive in the wagon and buggy for eight days and arrived here on Nov. 8. There was a large log house on the place when purchased, with puncheon floors and a stone chimney on the outside. This remained the home of Alanson Beach for some years. He then built a large frame house. He was a man of earnest religious convictions and had been ordained a minister of the M. E. church at a meeting of the Troy conference, May 15, 1853, by Bishop Waugh. He never assumed pastoral duties but served as a local preacher, doing good work in many places, whenever called upon. He was a power for good in Lyle and preached as far east as
Le Roy and southwest to Northwood, Ia., and occasionally at Austin, with great acceptance, especially the Congregational church in the absence of their pastor. He was prominent in town and county matters and held various offices of trust. He was county commissioner for eight years and for the greater part of that time chairman of the board. It was great part owing to his economy in expenses, and influence with the board that Mower county paid a bounty of $200, besides the town bounties, to each solider that went from her borders. He also commanded his children after him that they kept the way of the Lord. He died July 30, 1877.

John Beach, soon after his arrival, took a claim on the sw 1/4 section 26 in Lyle. He made improvements in the spring of 1857 and lived there altogether about three years. He then bought with his father and brother 280 acres of land beside his father's in sections 32 and 33, and lived there some two years. When his brother enlisted for the war in October, 1862, he moved to the old homestead to live with his father. He still lives there, and with him his mother, now 83 years old. He has taken an active part in the management of school and town affairs and held various offices. He was assessor of the town for eight or night years. In the fall of 1886 he was elected from his district to the board of county commissioners for four years, and has given such satisfaction that in the fall of 1890 he was re-elected for a second term of four years. He is successful as a farmer, owning about 400 acres. He has three children now living; Mary A., born March 1, 1861, the wife of F. J. Sessions; Frank M., born May 21, 1866, now general book keeper of the U. S. National bank of Omaha, and Katie M., born Oct. 11, 1874. 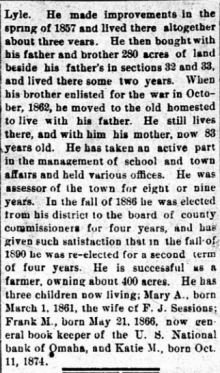