A large number of relatives and friends attended the funeral service for Oliver Blakestad Wednesday afternoon. He who had helped to lay away scores of persons, passed on, and was carried to his last resting place in Pleasant Hill cemetery. Thus again, the community was warned of the brevity of this earthly life. The deceased had reached the three score and ten years allotted to man, but even these are but a step from the cradle to the grave. Rev. Torvik averred that the "grain" is ripe when God harvests it, whether the person be a child, youth or adult. "Are we all ripening for Heaven?" was one of he challenging queries.

Supt. Oscar Miller sang "My Faith looks up to Thee" and "Softly and Tenderly Jesus is calling" during the service.

The business places were closed from 1:30 to 3:00 in respect to one who for nearly half a century had been identified with the business interests of Lyle.

Oliver George Blakestad was born in Otranto township, on the old Blakestad homestead on October 19th, 1871.

He was a member of the Mona Lutheran congregation until the Lyle Lutheran church was organized, of which he was a charter member.

Mr. Blakestad was in the hardware and furniture business in Bode, Ia., and Adams for several years. Since 1904 he had been in the furniture and undertaking business in Lyle.

There are twelve grandchildren, also a brother, Edward Blakestad Albert Lea, Minneasota.
of Mena Ark., and a sister, Mrs. Sophie Olson of British Columbia, Canada; and many nieces nephews, and other relatives.

The family wishes to thank the relatives and friends for their many kind expressions of sympathy, memorial and floral offerings. 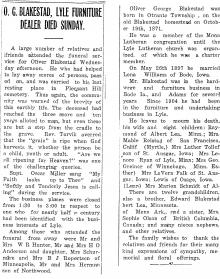