The above tells the story of the length of time allotted one of this vicinity's old citizens.

Ole O. Running was born in Norway and for 39 years made his home in that country. He came to America with his wife and children and settled in Mitchell county Iowa. There he made his home for 16 years.

In the year 1889 he moved to Minnesota and located on a farm 4 miles west of Lyle, where he lived until his death. He has been in poor health for years and during the past two winters has been confined to his bed. He leaves behind his wife, three sons and one daughter.

The funeral services will be held from the home at 12 o'clock, Saturday, and later from the church in Mona. 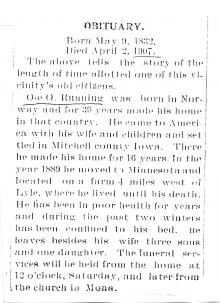