Ole Anderson, who has been making his home with his daughter Mrs. Bagstad, on the W. Bryan place for the past two years, was struck and instantly killed by the ICRR south bound passenger train last Monday afternoon about one mile west of Lyle.

The deceased it is said had been drinking quite heavily during the day and had started up the track when the accident occurred. He was sitting on one side of the track but as the train approached him he endeavored to cross to the other side. Mr. Anderson was over 70 years of age and leaves several relatives in this vicinity to mourn his loss.

The funeral was held Wednesday afternoon, the service being conducted by Rev. Rasmusson from Adams. 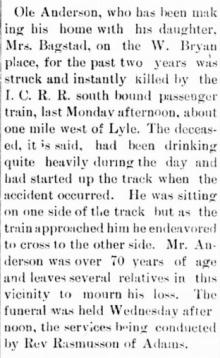