Mrs. Christi Larson, wife of Sever Larson, who had been at Austin since last autumn, passed away at 11:45 on Friday morning at the home of her son, Chris Larson, 807 Baldwin Street. The funeral service was held at 2:00 o'clock Tuesday afternoon at the Lutheran church at Mona, with burial in Pleasant Hill cemetery.

Mrs. Larson was born in Hardanger, Norway, in 1851. She immigrated to the United States with her husband in 1882. They first settled in St. Ansgar, Iowa, later moved to Carpenter, Iowa, where they lived for a number of years, and then moved onto a farm near Lyle, and later moved to Mona, where she resided until she was taken ill.

Six children were born to Mr. and Mrs. Larson, Bertha, who died in infancy; Lewis, of Enderlin, N. D., Bert, of Dodson, Mont., Martin, of Scottsburg, Sask., Can.; Chris, of Austin, and Clara, Mrs. Clarence Meyer of Lyle. All the children except Martin, were with their mother when death came. ---The Lyle Tribune 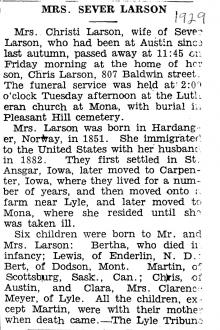