Funeral services for Mrs. Chris Nelson, 71, of Mona, who died in Austin Thursday Sept. 27 following a stroke, were held Tuesday, Oct. 2 at the Mona Lutheran church with the Rev. Stanley V. Gjervik officiaing.

Mrs. Chris Nelson, daughter of Andrew and Johanna Olson was born June 2, 1880 in Smoolene, Norway. In 1882 she came to this country with her parents and has since lived in the Mona community. She was baptized and confirmed in the Lutheran faith.

On February 18, 1915 she was united in marriage to Chris Nelson and to this union one son was born who died in infancy.

She had been in failing health for a number of years, but was able to carry on her daily duties. On Thursday morning, Sept. 27, she suffered a stroke and within a few minutes had lapsed into a coma from which she never regained consciousness. She passed away that same evening at the St. Olaf hospital in Austin.

She is survived by her husband, a brother, August Olson of Mona, three nephews, four nieces and many friends.

Burial was in the Pleasant Hill cemetery near Mona with Rev. Gjervik in charge of committal services. 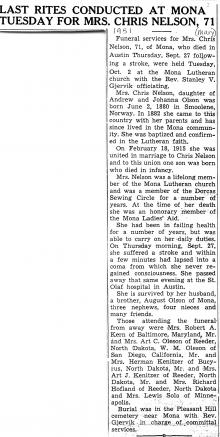