She was the wife of Rev. C. A. Hildebrand, a German Lutheran preacher, who came from Illinois to Mower county in 1858, and preached to the scattered members of that nationality and faith from St. Ansgar on the south to Rochester on the north, the first in the whole region. Eventually a small church was built near his residence. Mrs. Hildebrand was born in Oldenburg, Germany, in 1816, and bore her husband eight children. She lost her husband in December, 1864, and remained on the farm he had pre-empted for ten years thereafter. She has since lived with her children at Adams and Lyle. She was a devout woman, a kind parent and neighbor and had enjoyed good health till eight days previous to her death. Seven of her children survive to mourn her loss, one of whom, Mr. A. D. Harris, is a resident of Austin. 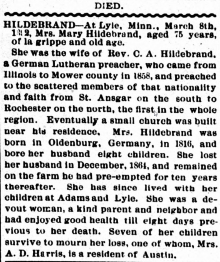