At the age of 20 years she immigrated to this country and made her home in Six Mile Grove until her marriage in 1895 to Erick O. Johnson. In 1899 her husband died leaving her with two children. Mrs. Chas. Fossey of Lyle, Minn. and Norman Johnson of Albert Lea, Minn., also four step-children. Mrs. J. P. Dean who recently passed away at her home in Denver, Col., Mrs. Ida Hildreth of Lyle, Mrs. Clifford Leaf of Waterloo, Iowa, and Tudie Johnson of Pipestone, Minn.

Mrs. Johnson was taken sick three weeks ago Saturday with pneumonia and for a time seemed to improve but a week ago she suffered a relapse at which time in order that she might have the best possible care she was taken to the hospital at Albert Lea, Minn., but it was of no avail she continued to grow weaker until the end came. She was an active member of the Saviors Lutheran church also the Ladies Aid Society. Besides her children she leaves to mourn her departure four brothers and one sister of which two brothers and one sister are in Norway and O. Standal of Enderlin, N.D., and S. Standal of Minneapolis, Minn., also 8 grand children.

Mrs. Johnson was a woman of a quiet and unassuming disposition and the last years of her life her main thought was of service for her children much of her time being spent in their homes where she exercised her Christian influence at all times.

The funeral was held Friday p. m. at the Lutheran church with interment at Pleasant Hill cemetery. Rev. Vang officiating.

We wish to extend sincere gratitude and hearty thanks to all who in any way have shown us kindness and sympathy during the sickness and death of our dear mother. Also to the choir for their beautiful songs. 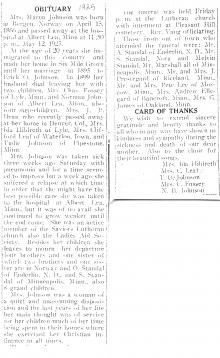