Undated painting based on photograph taken in 1862
Image courtesy of Knud's Great Great Grandson Jack J. Hunt
Picture shown above has been electronically enhanced by Deep Nee Productions
To view a larger copy of this image, click HERE

Knud Gullicksen was enlisted in Company K of the 15th Wisconsin by 2nd Lieutenant Olaus Solberg in Mitchell County, Iowa, on January 28, 1862, for a 3 year term of service. The men of Company K called themselves "Clausen's Guards" in honor of the 15th's first Chaplain, Claus L. Clausen. Most of the company's members were from Scandinavian communities in Iowa and Minnesota, with the rest from Wisconsin. Company K was commanded by Captain Mons Grinager, with 1st Lieutenant Ole Peterson as second-in-command, and 2nd Lieutenant Olaus Solberg as third-in-command.

Knud was mustered into Federal service at the rank of "Private" on February 11, 1862, at Camp Randall, near the City of Madison, Dane County, Wisconsin. He was listed by the army as being a 33 year old married resident of Mitchell County, Iowa. He is believed to have been farming near the Town of Osage in Mitchell County. At the time of his enlistment Knut and his then wife Ranvei had had 4 children: Maria K, born 1851 (died within 1 year of birth); Gullick Knutson, born 1852 (died within 1 year of birth); Mari Johanna, born August 30, 1855; Gullick Knutson, born February 2, 1858; and Mary Knutson, born September 25, 1861.

After only 3 weeks at Camp Randall learning to be a soldier, Private Gullicksen left there March 2, 1862, with his company and regiment to join the war. From then until June, 1862, he was listed as "present" with the 15th. As such he may have participated in the surprise raid on Confederate Cavalry forces at Union City, Obion County, Tennessee, in late March, 1862. He may also have taken part in the successful siege during March and early April, 1862, of Island No. 10 on the Mississippi River in the State of Tennessee.

After the surrender of Island No. 10 on April 7, 1862, Companies A, F, H, I and K were sent to occupy the island. There was much hard, physical work to be done on the island, and quickly. The slave-built fortifications contained many cannons, which the Confederates had installed to defend against a Union attack coming down the Mississippi River from the north. These had to be moved and the fortifications changed so they could be used to defend the island against a possible Confederate assault coming up the river from the south. This task was made even more difficult due to the unhealthy nature of the island, and with problems getting adequate supply of rations. These conditions caused many complaints, sickness, and even death amongst supply the soldiers there. It apparently had its effect on Private Gullickson, who was recorded as being "Sick in his quarters" for at least part of his time.

June 11, 1862, Private Gullicksen departed Island No. 10 by steamboat along with his company and regiment to go on summer campaign through Tennessee and the States of Mississippi and Alabama. However, starting June 20, 1862, he was listed as being "Sick in the hospital" at Union City, Tennessee. It was believed that he caught up with the 15th after it left Union City and marched south to Jacinto, Mississippi. On July 27, 1862, Private Gullicksen was transferred from Jacinto to the General Hospital in the Town of Farmington, near Corinth, Mississippi, where he was admitted suffering from "Phthisis Pulmonalis" [tuberculosis]. On July 30, 1862, he was transferred north to Camp Dennison, near the City of Cincinnati, State of Ohio, where he was admitted to the General Hospital on August 5, 1862.

Despite nearly 6 months spent recuperating in Army hospitals, Private Gullickson had been unable to recover his health. As a result the Army gave him an honorable discharge due to "disability" on December 9, 1862, at Camp Dennison. His Certificate of Disability for Discharge listed Knud as being "thirty three years of age, five feet four inches high, light complexion, blue eyes, sandy hair, and by occupation when enlisted a Farmer." The certificate stated he was incapable of performing duties of a soldier because of "Chronic derangement of Kidneys & Incontinence of Urine."

It is said that Knud then returned to his home in Mitchell County, Iowa. Knud and his wife Ranvei had 2 more children at Osage, Iowa: Andrina Korina, born October 25, 1864; and Gustav Adolph Knutson, born August 20, 1868. In 1874 Knud moved his family to Burnett County, Wisconsin, where he farmed. There in 1878 he applied for and received an Invalid's Pension based on the following incident.

"...in the line of his duty at New Madrid Island No. 10, in the State of Tennessee on or about the 13th day of June 1862, he was just relieved of Guard [duty] when a wagon hub in passing crashed his side that a rib was broken for which was disabled for 9 days; 2 weeks after he laid 14 days in Hospital at Union City Tenn. on Cholera Morbus [Cholera] was laid up in [Jacinto at] Camp Erickson 3 days[;] also was sick in Gen'l Hospital at Camp Dennison, Ohio 2 months from which he was discharged on Surgeons Certificate of Disability."

In 1886 Knud for an increase in his pension. As part of this he submitted an affidavit sworn in Mitchell County that stated "...on the march from [the Town of] Hickman [State of Kentucky] to Union City he contracted the Piles..." [Hemorrhoids]. In February, 1907, he applied for a Veterans Pension. At the time he was living in the Town of Lyle, Mower County, State of Minnesota. Sixteen years later Knud passed away there at the home of his daughter Maria Gulickson. His death was ruled as being due to "Paralysis" and "Senility."

To see the image of Knud taken before he passed away at age 88, click HERE. 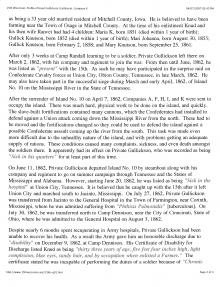 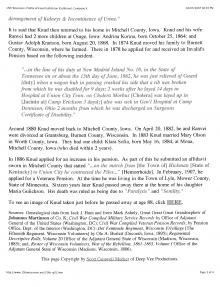