-THAT KNIFE.- Yes, we know Ira Jones is the boss hardware man of Southern Minnesota. Although he carries an immense stock purchased from the largest houses of the east, yet this does not fill the bill. Even the trees yield up their hardware.

We have a knife, about twelve inches in length, which he loaned to us, found in the centre of a basswood tree, which was split at his door for firewood. The tree was about a foot in diameter. The knife lay hidden in its very heart. It is a butcher knife, with deers-horn handle, but very little rust, and in excellent state of preservation.

The wood next to the knife was a little colored. Friend Michael Teeter drew the wood from his wood lot in Lyle township, about 12 miles south of Austin, where he used to live some twenty years ago. He says about that time there was an Indian encampment on this land, near the river, and no doubt this knife was left in this tree which was then a sapling. If this knife could tell us its history it might be very interesting. 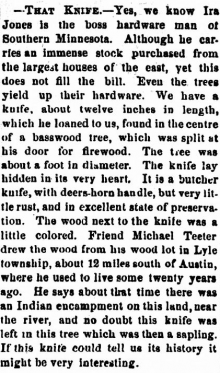