-The sad news of the death of John Gould reached here Monday, he having been found dead in bed Monday morning. He had been in poor health for a number of years, suffering from consumption and early last winter he became so bad that he could no longer attend to business and leased the Lyle Tribune, of which he was proprietor, to R.A. Ferris. In fact he got so he could scarcely walk at all. Then he commenced taking treatment of Dr. Culmsee and had been slowly but steadily improving.

He was down to St. Ansgar to take treatment Saturday. Sunday he felt so well that he told his Mother she could drive with him to Mona to take the train the next morning and he would walk back in the afternoon. He had walked that distance- two miles before, so much had improved. He ate a hearty supper and went to bed about 11 o'clock. About two his mother heard him cough a little as he often did in the night, but thought nothing of it. But alas, when they went into his room at six he was cold in death, having passed away without a struggle. His death is supposed to have been due to heart failure. 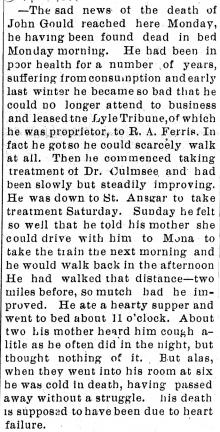