Mrs. Ida Schrader wife of Fred Schrader of South River street, died Sunday afternoon at 4:30 at the age of 58 years. Deceased has been ill for some time with asthma and later tumors.

Ida May Chilton was born in Auburn, Vermont, Nov. 31 (sic), 1855. She came with her parents to Lyle township when she was 14 years old. She attended school in Cedar City and Austin. On March 22, 1892 she was married to Fred Schrader and for a time they made their home in Iowa. Later they lived on the L. D. Carter farm and seven years ago they came to Austin.

She was a member of the Baptist church of this city and also of the Miozota society. She leaves to mourn her loss her husband and mother, also a niece and a nephew. A daughter Nellie died. The funeral services will be held Wednesday morning at 10 o'clock at the house and 10:30 at the Baptist church. Dr. Stout will officiate. Burial at Cedar City. 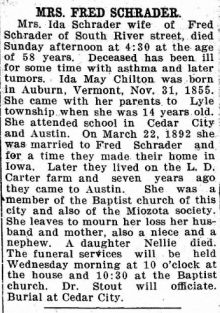