The death of Gullik O Blakestad came last Thursday afternoon at 5:40 after a lingering illness of about 8 weeks. The deceased had been in good health almost all his life until last fall when he was taken sick with appendicitis, that disease which of late has become so prevalent, and went to Rochester for an operation. After a few weeks at the hospital he returned home and was apparently in the best of health. He claimed that he had never felt better but from the hand of sickness he was relieved only a short time as about eight weeks ago he was stricken with pneumonia. This changed from one disease to another till his body was worn out. All medical skill could do, was no avail. A doctor from the noted hospital at Rochester came over to see him and another physician from Mason City was called to consult with the local doctor in charge, yet nothing seemed to help him and he grew weaker and weaker.

This was the fate of one who had grown to manhood in our midst and had made a success of life. His character was untainted, his ideas and purposes were high and noble, and the taken from his life, leaves an example behind that will be cherished and admired by all who knew him.

The deceased was born in Rock county Wisconsin in 1852 and was the second of a family of 11 children. A year later his parents moved west and settled on the old homestead near Otranto, Ia., where he grew to boyhood and manhood. In 1875 he was married to Miss Engebor Jeglem was survives him. To them were born three children, one having preceded the father to the realms beyond. The others were Laura and Otto, who are still at home. Besides his wife and two children he leaves an aged mother four brothers and four sister; Mrs. C.K. Olson of Davenport, N.D., Mrs. Peter Erickson of Devils Lake, N.D. and Mrs. Gaarder of Kensett, Ia. The brothers are Lewis, Edward, Halvon[illegible: Halvon?] and Oliver, all of this vicinity.

The funeral was held Monday at 12 o'clock, from the house and was largely attended. Rev. Deitrichson read the scripture and made a few brief and impressive remarks after which the cortege went to the Mona church, Rev. Dietrichson was assisted by Rev. Waldeland of St. Ansgar. who preached the sermon in the English language. Bis words were particularly appropriate and fitting for the solemn occasion. The sorrowing relatives and friends who had gathered at the church were given an opportunity to take a last look at the face they had loved to see when full of life and animation. The esteem in which Mr. Blakestad was held was shown by the large number that came to pay their last respects.

After the service the casket was placed in the hearse and taken to the silent city of the dead where the remains were laid to rest. Halvor Dahl, the undertaker of St. Ansgar had charge of the funeral. May the sleep that knows no waking and the loss which is to many be a shrine to those bereft and may it ever speak of the life which is to come. 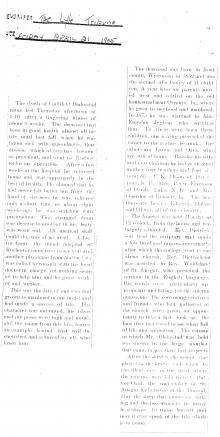