George Jahr, who had not been well for some time, passed from this life. Saturday morning, on the date of his birth. He was able to be about until a few days before his death, when he became very ill, and slipped away after being in a coma for several hours.

His death was a shock to the community as well as the family, which felt the loss most keenly at this holiday season.

Mr. Jahr was quiet, and retiring, but had many friends. During the autumn season he enjoyed playing croquet with his neighbors and no one realized that his race would soon be run.

For years he was a faithful employee of the Illinois Central Ry and for a short time the family resided at Galena, Ill., in order that he might be near his work, otherwise he lived here. 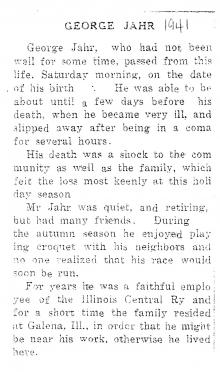