Death is no respecter of person, for it calls to old and young alike, and it seems that this has been a busy week for the never tiring grim reaper, who breaks the family circles, rends the loving home ties, and leaves the crushed and sorrowing ones alone with their grief.

One of those called home this week was little Garfield Orris Anderson son of Mr. and Mrs. Carl Anderson. The little fellow was taken violently ill about two weeks ago, and was a constant sufferer until the end came Sunday afternoon.

Garfield was born in Lyle October 4, 1906. He was a member of the Cradle Roll of the Congregational Sunday School, and is the first of that number to be taken to the Heavenly home, where there is no more sorrow or suffering. He was also the first to leave the family circle, which shall sadly miss him, and his childish prattle, as they gather together, a broken band.

The funeral was conducted by Rev. Ruddock, at the Congregational church Tuesday afternoon at 2 o'clock and interment was made in the Pleasant Hill cemetery. The floral tributes were numerous, and helped to express the sympathy felt by the community for the parents in their hour of sorrow. 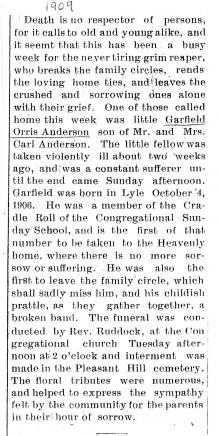