Firing a salute of seven shots by a squad of American Legion members from Lyle and after sounding taps, the body of Elmer Alfred Hofland who was wounded in action in France in September 1918 and died in base hospital No. 50 on December 2 of that year from diphtheria, was laid to rest in the Norwegian Lutheran cemetery at Mona yesterday afternoon.

The deceased soldier was born in June 12, 1888 in Mitchell County, Iowa, entered the service of his country on September 18, 1917 and was stationed at Camp Lewis, Washington before being sent to France as a corporal in the 362nd Infantry.

Besides his father and mother, he leaves five sisters, three at home in Lyle and two in Montana, and two brothers, one at Lyle and the other in Montana.

The body, in a sealed casket, arrived in New York on December 18, leaving there on January 5 and reaching Lyle on the 8th. Funeral services were held from the home in Lyle and from the Lutheran church at Mona. Rev. A.E. Moe officiating. Members of the American Legion posts at Lyle and St. Ansgar formed the honorary escort of their departed comrade to the cemetery three miles south of Lyle. 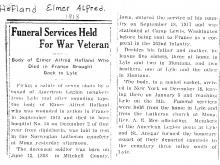