Mrs. Elizabeth Bedford of Woodbury died at four o'clock Wednesday morning October 21, 1914 at the home of her mother, Mrs. M. A. Glines of Austin where she had been for the last three weeks. Death was caused by a complication of diseases. She had been in poor health for a number of years and though a great sufferer, bore her trials patiently.

Her husband and five children, Alice, Gertrude, Frank, Roy and Ray survive, also her mother, a sister and five brothers.

The funeral was held Friday afternoon at one o'clock from her home. Interment at Woodbury. 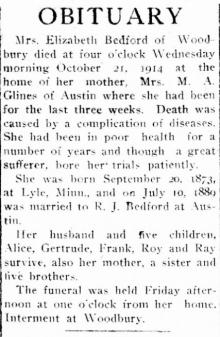