Edwin Oliver Christianson, son of John and Sorine Christianson was born at Mona, Iowa, October 4, 1891, and passed away at the St. Olaf hospital at Austin Wednesday afternoon, April 2 following a brief illness. He was baptized and confirmed in the Lutheran faith and was a member of the Mona Lutheran church until moving away from here.

He was a veteran of the first world war. On May 28, 1927, he was united in marriage to Fern Dixon and to this union two sons were born, Orrin John, who passed away in Jan. 1929 and David Alan, surviving. Others left to mourn his passing are his aged father and five sisters, Minnie and Clara Christianson, Ruth Anderson, and Eva Carlson of Mona and Irene Lee of Carpenter, Iowa. 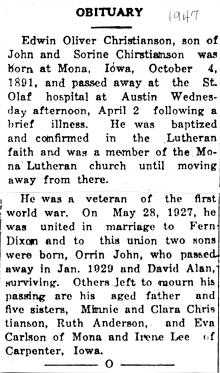