By Catherine Watson
Travel Editor
Cedar Falls, Iowa
Though we had allowed plenty of time to find Cedar Falls itself, we can up short on time - and shorter on directions- once we got there.

Our goal in town was the Star Clipper, known simply as "the dinner train" in the small towns along its 109-mile stretch of private track in the Cedar River Valley.

Actually an elegant rolling restaurant, the dinner train has been running nightly since May 5- and doing a booming business, a spokesperson told me: It has carried about 20,000 passengers so far.

Publicity about the Clipper has included sets on national TV shows and even a story in The New York Times, the tone of which indicated how surprised the writer was to find anything this good out in the boondocks.

But the train has gotten its best publicity by word-of-mouth- rave reviews from satisfied diners, one of whom recommended it to me in August.

I decided that the Star Clipper would be a perfect present for a friend's birthday in early October: He's fond both of old trains and good food.

I also decided to keep the train trip a secret until the last possible moment. This meant that while we were rushing around Cedar Falls trying to find the Clipper's boarding point on Leversee St., my friend had no idea what we were looking for, so he couldn't help.

Finally, I spotted a small Star Clipper sign with an arrow pointing up a side road. We followed it, and there, at the top of a weedy rise, stood the train.

Wisps of white smoke trailed from its diesel engines, candles gleamed in the windows and the train's gray paint blended with the twilight so that it looked a little ghostly. The scene was like a movie fantasy from the 1930's or 40's.

My friend gasped, grinned and said, "Oh, neat!" like a pleased 12-year-old, so I knew the 4 1/2-hr drive had been worth it. (He added gallantly that it was the thought of the train that counted, so it would have been neat even if we'd missed it. But that was before he tasted the food.)

A maitre-d', not a conductor, took our tickets at the door of The Snowbird, one of the train's two restored dining cars; the other is The Velvet Rose. They are separated by the kitchen car-called Vining's Pride after the family of restaurateurs that runs it- and flanked by a pair of diesel engines, one on each end of the train.

One engine pulls the train up the single track about 28 miles, and the other takes it back- but slowly, slowly. The round trip takes about 3 1/2 hours, during which the chef and cabin stewards fetch up a memorable meal, more than worth the $35 per-person price.

Each dining car seats 72 people, four to a table in traditional railroad style. Somehow I hadn't figured on sharing the evening with a pair of total strangers, but it was pleasant anyway. our tablemates, a retired
TRAIN Continued on page 1E

couple from southwest Missouri, had driven more than 500 miles just to ride the Star Clipper, which made our mad dash from Minneapolis look a little tame.

We wouldn't have had to drive so far if my friend's birthday hadn't fallen when it did. But on the crucial Saturday in early October, the train left from Cedar Falls- the farthest from the Twin Cities of all its departure points.

Most nights, the train runs out of Osage, Iowa, where it's headquartered, or Waverly, Iowa, or Lyle or Glenville, Minn. The rail line itself, dubbed the Cedar Valley Railroad, is owned by a wealthy Washington, D. C., businessman, who uses it for freight as well as the dinner train.
The line last saw passenger service in 1933.

While we waited for the trip and the meal to begin, we ordered wine (not included in the dinner price) from a short but pleasant wine list, chatted with our tablemates and admired the sleekly elegant decor.

In both cars, candlelight from the brass-trimmed hurricane lamps on each table gleamed on gold-edged, red-bordered service plates, heavy silver and glassware and dainty vases of fresh flowers.

Promptly at 6, at half-hour after boarding time, the Star Clipper began to roll northward, accompanied by chirps of delight from the guests.

Soon the efficient young dining-car stewards served the soup course- a nicely flavored cream of broccoli with cheese- followed by large, extremely fresh tossed salads. Service was meticulous and reasonably paced, with the main course appearing about half way into the journey.

The menu is semi-fixed, and you must specify what you want when you make reservations. There are three choices: Creamed seafood pastry, pronounced excellent by one of our tablemates; a succulent roast Cornish game hen with raspberry sauce, and an awesome prime rib, nearly 3 inches thick (no kidding- I measured).

Accompaniments were a perfectly cooked mix of broccoli, baby carrots and French-cut green beans; a wild-rice blend with game hen; a baked potato with the prime rib, and hot croissants. Dessert was mint ice cream in a chocolate pie shell, topped with chocolate mousse and whipped cream.

While we at ourselves silly, the fall twilight lengthened into darkness, and large spotlights on the sides of the train were turned on to aid our sightseeing.

Not that many of us looked out once the food arrived. When we did, the scenery was a bit incongruous.

Back yards and the back sides of tiny main streets. Abandoned telephone poles, long since wireless. Fields in various stages of harvest. And what appeared to be an aging military post, with a sign reading "Naval Homes." Nobody we asked knew anything about it. We concluded that a U.S. Navy base in Iowa would be a real secret.

Now and then, the track would cross a good-sized road. Red warning lights would go on, bells would ring, guard arms would come down and traffic- such as it was- would stop for us, just as if we were a real train.

Once we stopped a not-too-pleased jogger, out on the road for his evening run. He didn't wave, but many other people did, including an entire family standing in the parking lot of a pizza place in Waverly.

The championship waving award went to a retirement complex in

Janesville, where every single window framed an elderly person, all waving at the train as we rolled by.

The whole experience was so pleasant and so other-worldly that at one point, I half-forgot where we were.

Relaxed by the good food, the wine, the soft candlelight and the gentle rocking of the train, I glanced absently out the window and was startled to see cornfields. It had begun to feel so much like Europe, I'd expected vineyards.

The Star Clipper will operate nightly through New Year's Eve, with additional noon-time trips on Saturdays and some Sundays in November and December. It will be shut down from Jan. 1 to March 16.

For reservations this fall or next spring, call(515) 732-3738 or 3739, or write The Star Clipper Dinner Train, Rt. 2, Box 98B, Osage, Iowa 50461. Bookings for weekends should be made about two months in advance, a spokesperson said: weeknight bookings need less notice. Payment is due two weeks in advance of departure.

The quickest route from the Twin Cities to any of the Star Clipper's departure points is Interstate Hwy. 35W south to Austin; follow state or local roads from there.

The Star Clipper was stopped at Cedar Falls; behind the engine where the Snowbird, the kitchen car, The Velvet Rose and another locomotive for the trip in the opposite direction. 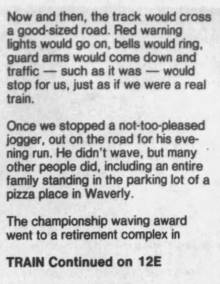 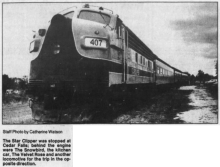