--DEATH OF WELCOME CHANDLER.--
Wednesday, at his home, about six miles from Austin, Welcome Chandler died of paralysis. He was 74 years of age.

Mr. Chandler came from Canada East to Austin township 23 years ago, his sons, David L. and John coming a year or two before him. He was married in Canada fifty years ago this next March, to Amy Phelps. Eleven children were born to them, and eight are still living: David L., John, Mrs. Joshua Epler, George, Starling, William, Mrs. Jacob Epler and Mrs. H. C. Trowbridge. A son, Stephen, died in Andersonville, starving to death in that prison-pen of the south.

Mrs. Chandler was a member of the M. E. church of this city, and one of its first trustees. He was a man noted for his hospitality, and his house was always a home for the itineracy.

The funeral services were held in the school-house at Cedar City last Thursday, and were conducted by Rev. A. Cressey-- a large congregation being present, paying the last tribute of respect to the deceased. Several of the business men of Austin were in attendance, and many more would have been glad to have thus shown their regard for one of Austin's highly respected pioneers. 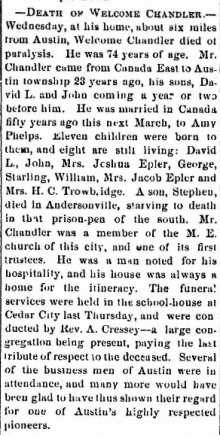