--Died, in the town of Lyle, Friday night, July 27, Mrs. Christina, relict of Rev. S. Loomis, aged 27 years. Mrs. Loomis was born in Penn., but when very young moved to Ohio. She was married when 19 years old at Wooster, Ohio. Mr. and Mrs. Loomis lived 12 years in Indiana and 27 years ago came to Lyle. Mr. Loomis died some 20 years ago from disease contracted in the army service.

Last week Monday Mrs. Loomis was in usual health but exposed herself to the rain and was stricken with paralysis Monday night. She leaves five children of a family of 12, the only one in Mower county being Mrs. E. D. Ames. Funeral services very largely attended, were held at the Ames school house Sunday, by Rev. C. D. Belden. 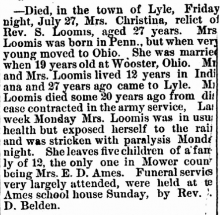