Mrs. Anderson was born near Christiana, Norway. Nov. 26, 1860. In Feb. 1885 she married Thomas Craig of New Castle on Tyre, with whom she has a son Adolph who is now 14 years old and mourns the loss of a dear mother. Mr. Craig died from consumption when Adolph was only a year old.

The sickness that laid her in the grave commenced with her in 1895 from which time she has suffered severe pain and especially the last two years. It has been almost unbearable near by all the time. Having tried several noted doctors but seemingly with no help.

Her mother who is 79 years old lives in Norway, where she also has five sisters living. 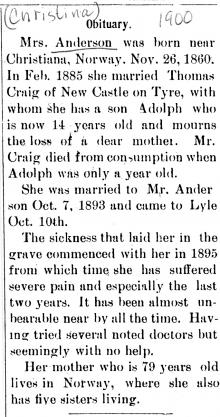