A CENTENARIAN GONE.-- Mr. Zebulon Baxter died yesterday at the residence of George Varco, in the town of Austin. Mr. Baxter was born on the 25th of July, 1774, and consequently lacked but two months and thirteen days of being 101 years old. He was a native of Vermont, and was a Soldier in the war of 1812. During the last year he had been confined to the house, but previously had been very vigorous and active, and he retained his mental faculties unimpaired to the very last. The wives of George Varco and J. H. Hickcok respectively were his grand-daughters. He will be buried to-day. 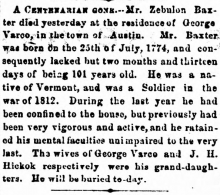