At the residence of her daughter, in Reading, Mich., Tuesday, Nov. 15, 1904, of old age, Mrs. Caroline, widow of Welcome Osborn. Her maiden name was Yates.

She was a native of Canada. She was married to Mr. Osborn in April, 1849. They came to Cedar City in 1856 when there but three houses in Austin, and experienced all the hardships of pioneer life. In 1864, the family moved to Lyle township, section 14, and lived there until about ten years ago when they moved to their farm near Cedar City. Mr. Osborn died there Feb. 28, 1903. Mrs. Osborn, in August, 1903, went to live with her daughter in Michigan.

Another of Austin's territorial pioneers has thus passed over the river. She was a member of the M. E. church for nearly half a century. 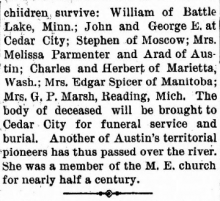