Mr. Anderson observed his 97th birthday Aug. 10. He was the oldest of seven children born during the second marriage of his father, Halvor Anderson.

For many years, Mr. Anderson was a tinsmith for a hardware store operated at Lyle by his brother, Andrew. When he retired in 1911, he was operating a farm.

He lived in the Lyle area all of his life except when he proved a claim in Bowan county, N. D.

He is survived by a brother, Nils, and a sister, Mina, both of Lyle. Funeral arrangements by Worelein (sic) Funeral home will be announced later. 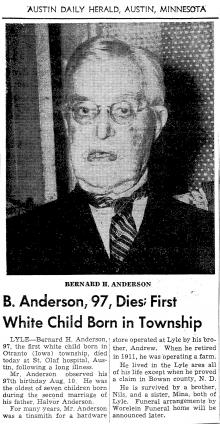