Athletics power their way to a state title

Athletics power their way to a state title

MINNEAPOLIS – Lyle-Pacelli senior Kristi Fett has been double and triple teamed over the past three days. She’s taken elbows, pushes and been shoved. She couldn’t be any happier about it.

Fett and the No. 1 seeded Athletics locked up the first state title in program history when LP beat Sleepy Eye in the Minnesota Class A Girls State Tournament championship in Target Center Friday.

Fett, a 6-foot, 5-inch center, had her best game of the tournament as she poured in 30 points on 11-of-17 shooting while grabbing 16 rebounds and blocking five shots. She joked that her chiropractor Faye Bollingberg helped keep her line over the week, but Fett wasn’t worried about the pain she was feeling after she got her hands on the state championship trophy.

“It’s been a lot on and my body’s been beat up. Bumps and bruises last temporarily, but memories like these last a lifetime,” Fett said.

“That’s so true. You’re not going to remember if you bled in this game or a bruise that you got,” Fett continued. “You’re going to remember the look on your teammates’ faces in the team circle for the rest of you life. I thought we played with a ton of heart. We talk about X’s and O’s and those are important, but it comes down to grit, determination and the will to win the game. We played with the most heart and determination than we’ve played with all of our lives.”

Fett scored seven points in that second half run as she took advantage of a short-handed Sleepy Eye front line. Maya Ibberson was assigned to guard Fett, but she picked up her second foul early and she fouled out with 8:52 left in the game.

“She’s a handful,” Sleepy Eye head coach Ryan Hulke said of Fett. “We really had one girl that could guard her the way we wanted and that was Maya. Unfortunately she got in foul trouble. As a former Maverick, I’m glad [Fett] is going to MSU.”

While LP had 20 turnovers, it’s defense was in full effect in the state tournament. It held all three of its state tournaments to 43 points or less and it kept Sleepy Eye’s two big scorers at bay. Madi Heiderschedit, a St. Bennedict’s commit, had eight points and Brianna Polesky, a Gustavus commit, had seven points. Sleepy Eye shot 24 percent from the field.

“We didn’t play our best offensively, but our defense is really, really good. Coach [Brad] Walter does a great job on that side of the ball,” LP head coach Justin Morris said. “Our rotations were really good. Heiderscheidt is the real deal. We knew where she was all of the time and we ran her off the ball.”

Morris was glad that Fett was able to finish her LP basketball career with a powerful performance.

“That’s a big time performance from Kristi and she’s gotten so much better with her hands and her feet over the years,” Morris said. “She deserved this on that stage to be the most dominant player on the floor.”

Fett said she thought of all her former teammates when she was looking for motivation this season.

“It’s not just a team and community win,” Fett said. “It’s really about all of the players who have played here. We had a girl take a bus at 6:45 in the morning to get here and see us play here. Seeing all of those past alumni with the tears in their eyes; the feeling is crazy.”

While winning the first state girls basketball title in Pacelli history and the first state title in any team sport in Lyle history is a huge deal, LP junior Abby Bollingberg, who had 10 points Saturday, was feeling a little sentimental as things wrapped up. LP will graduate long-time standouts Fett, Brooke Walter and Kendal Truckenmiller and Morris has moved to Omaha, Neb. with his fiance and will likely will not return as head coach.

The Lyle-Pacelli girls basketball team celebrates after claiming the Class A state title with a win over Sleepy Eye Saturday at the Minnesota Class A Girls State Basketball Tournament in Target Center. Eric Johnson/photodesk@austindailyherald.com

Lyle-Pacelli’s Abby Bollingberg drives the lane during the second half of the Class A title game of the Minnesota Class A Girls State Basketball Tournament in Target Center. Eric Johnson/photodesk@austindailyherald.com 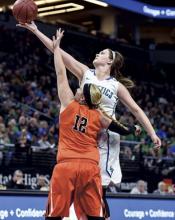 Lyle-Pacelli’s Kristi Fett reaches past Sleepy Eye’s McKenzie Cselovszki for a rebound in the second half of the Class A title game of the Minnesota Class A Girls State Basketball Tournament at Target Center. Eric Johnson/photodesk@austindailyherald.com 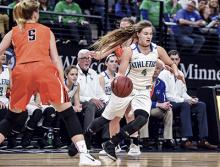 Lyle-Pacelli’s Olivia Christianson dribbles out of trouble during the second half against Sleepy Eye in the Class A title game of the Minnesota Class A Girls State Basketball Tournament in Target Center. Eric Johnson/photodesk@austindailyherald.com 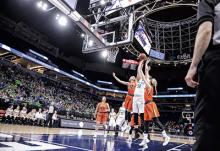 Early second-half action Saturday in the Class A title game between Sleepy Eye and Lyle-Pacelli in the Minnesota Class A Girls State Basketball Tournament in Target Center. Eric Johnson/photodesk@austindailyherald.com 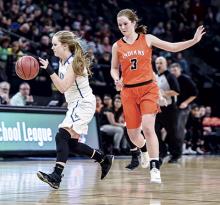 Lyle-Pacelli’s Kendal Truckenmiller dribbles past Sleepy Eye’s Brianna Polesky during the second half Saturday in the Class A title game of the Minnesota Class A Girls State Basketball Tournament at Target Center. Eric Johnson/photodesk@austindailyherald.com

The Lyle-Pacelli girls basketball team is applauded by the fans as they near wrapping up the Class A state title at the Minnesota Class A Girls State Basketball Tournament in Target Center. Eric Johnson/photodesk@austindailyherald.com