Another of Mower County's good citizens and pioneers has passed away. Arthur Albert Gemmel died Tuesday morning at 6 o'clock at his home at Cedar City, six miles southwest of Austin. Mr. Gemmel has been in poor health for some time past, but was sick only two hours before his death which was caused from a partial stroke and heart failure. He was conscious to the last and bade his family good bye.

Arthur Gemmel was born in Toronto, Canada, 58 years ago the 9th day of next September. When he was only nine months old his parents came to Minnesota settling at Cedar City and this has been the family home since. Mr. Gemmel has always lived on the family farm with the exception of a very short time. He was well known throughout the county as an honest, thrifty farmer.

He leaves a wife and six children, the oldest 14 and the youngest 3 yeas of age. The children are Agnes, Ada, George, Albert, Helen and Kenneth. His parents were Mr. and Mrs. Andrew Gemmel, also Mower county pioneers. He was the youngest son. His father was a native of Scotland and his mother of Canada, Andrew Gemmel coming to America in 1842 and settling in Cedar City in 1857. He died 15 years ago and Mrs. Gemmel died six years ago. A brother of the deceased, Andrew Gemmel, died last September. Three sisters are left of the seven children of Mr. and Mrs. Andrew Gemmel, Sr. they are, Mrs. J. E. Ingalls, Mrs. C. R. Varco, Mrs. Eaton officer, all of Austin.

The funeral will be held Thursday afternoon at 2 o'clock from the house, Rev. Ten Broeck of Christ Church officiating. Burial at Cedar City cemetery. The wife, children and sisters have the sympathy of the community. 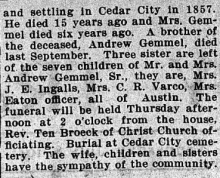