Arney Berg, one of Mower County's old citizens, passed away at his home in Lyle Wednesday afternoon after a lingering illness of six months.

He was born in Solar, Norway, Dec. 7, 1845, and lived there until he was 23 years of age. He came to this country and settled near St. Ansgar. He has lived in the vicinity of Lyle nearly 40 years, and in this village about 6 years.

Besides his wife, he leaves one sister, Mrs. Severson, two daughters, Misses Isabelle and Dora and four sons, Oliver, Henry, Thorval and Oscar.

The funeral was held Monday at 1 o'clock and was conducted by Rev. Esser. Interment was made at Pleasant Hill cemetery.

Thorval of Carrington, N. D., was the only son here to attend the funeral. 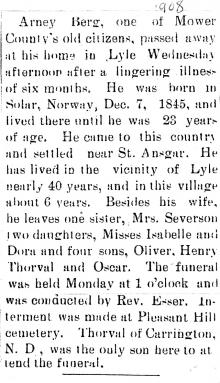