Arlene Bertha Lesch was born Aug. 5, 1916, in Mitchell County, Iowa to Arthur Ralph and Anna (Meier) Lesch. Arlene lived in Mitchell County until the third grade when she moved to Austin. She graduated from Austin High School in 1934. On Dec. 7, 1937, she married Herbert Bjork at St. Olaf Lutheran Church in Austin. They lived in Austin their whole lives except for two years, 1940 to 1942, when they lived in San Francisco, Calif. Herbert died on May 12, 1997. Arlene was an artist and painter and truly loved art. She did rosemaling, needlepoint, played bridge, sewed and enjoyed golfing. She was a member of St. Olaf Lutheran Church, where she was on the Altar Guild and was one of the needlepointers. She also enjoyed gardening, especially flowers.

Funeral services will be held at 10:30 a.m. Thursday, June 7, 2012, at St. Olaf Lutheran Church in Austin with the Rev. Bill Odermann officiating. Friends may call at Worlein Funeral Home in Austin from 4 to 7 p.m. on Wednesday and at the church one hour prior to the service. Interment will be in Pleasant Hill Cemetery, Mona, Iowa. Memorials are preferred to St. Olaf Lutheran Church. Condolences may be expressed to the family online at www.worlein.com. 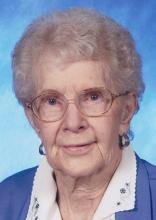 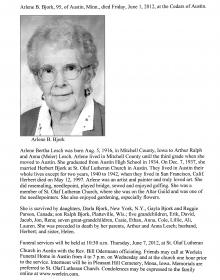