Mrs. Anna Knutson, the deceased was born in Solor, Norway Feb. 4th 1922. She came to America together with her parents while she was a little girl. The family came directly to Mitchell County, where they lived on a farm for a few years, and then came to Mower Co. In the year 1874 she was united in marriage to Ole Knutson. They lived in the village of Lyle 16 years after which they moved to the farm on which she lived at the time of her death.

Mrs. Knutson was the mother of six children, three of whom survive. They are Knut of this place, John of Albert Lea and a daughter Annie who lives at home. She is survived by one sister, three brothers and eight grand children, all living in this state.

The funeral was held Wednesday at the Lyle Lutheran Church, a large attendance being present. 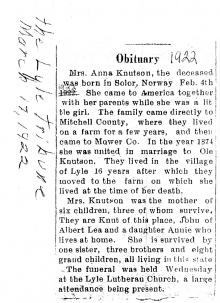